Only In Naija! Pastor runs mad attempting to deliver a mad man in Ibadan (Picture Included) 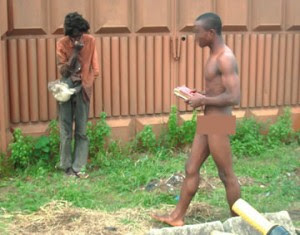 A pastor, who was simply identified as Timothy, according to an eyewitness, got to Ososami junctions of Oke-Ado around 5.20 p.m and went to meet a mentally-deranged man, popularly known as Tunde, who was sitting in front of a building in the area.


Semiu, a shop owner around the spot of the incident who spoke with the Nigerian Tribune said the pastor began to read the Bible on sighting the mad man, while he moved closer to him and laid hands on his head.
“At a point, there was a hot argument between the duo, which made the pastor to raise his voice as he was offering a deliverance prayer for Tunde – the mad man. The hot prayer lasted for over 15 minutes before another strange drama began,” Semiu said.
Another witness, a commercial motorcyclist (popularly called Okada rider in Nigeria) said at a point, the mad man removed the pastor’s hand from his head, and “suddenly, a strange spirit got hold of the pastor and he began to remove his cloth. He was naked and laid flat on the ground, speaking a strange language, with foam oozing out of his mouth.”
The mad man, it was gathered, initially left him in this position and sat at some distance away from the pastor, before the duo later sat closer to each other, while onlookers watched the strange drama.
Posted by Yimiton at 1:53 PM