Married Woman dies while having sex with another married man! 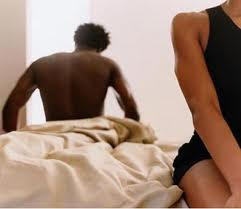 The level of infidelity in our marriages these days is so scary, that all we unmarried people begin to wonder if marriage is worth it afterall. People get married and still continue to 'cut show' with their exes. Serious story.


As told by PM News:
A married man, Amaechi Uche Padmore, has been arrested by the police and charged to a Lagos court on the allegation that his lover, Edith Nwokolo, died while he was having sex with her.
He is now facing a murder charge at Ebute Metta Magistrate’s court, Lagos over her death.


P.M.NEWS learnt that the lovers, who are both married, engaged in sex romp at 94, Mushin Road, Mushin, Lagos, Southwest Nigeria.
It was gathered that while Uche was on top of Edith, she started breathing heavily, jerked and died.
They were reported to have dated each other before they got married to different spouses.
Sources said immediately the incident happened, Uche, who has three kids, abandoned his pant and shoes and fled.
Edith was found dead on top of a bed and a neigbour who saw Uche with her before she died, raised the alarm and the matter was reported to the police at Olosan Division.
He was arrested and arraigned on Wednesday for murder before the presiding Magistrate, Mr.  T. Aborinwa under section 221 of the criminal code law of Lagos State of Nigeria 2011.
P.M.NEWS gathered that her death triggered controversy as the deceased woman’s family insisted that Uche was responsible for her death.
But the autopsy report presented at the court showed that she died of heart related problem. When the matter came up at the court, Uche pleaded not guilty.
The presiding magistrate granted him bail since the autopsy showed she died as a result of  heart problem.
The court referred the matter to DPP for advice, while adjourning it till 25 July, 2012
Source: PM News
Posted by Yimiton at 8:22 AM