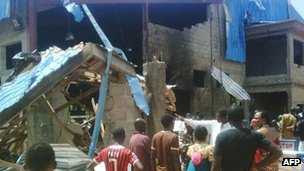 The attack which seriously injured the Reverend father in the church occurred around 8:45 AM today, during the morning mass.


Eyewitnesses told SaharaReporters that a lone car bomber approached the church gate hoping to quietly drive into the church before exploding the bomb but the security men at the gate refused him entry.


The bomber then reversed his car and rammed it forcefully against the gate of the church, the gate caved in as the bomb exploded injuring several churchgoers.


Nigerian troops have cordoned off the area while the police and Kaduna state government officials are calming down  christian residents in the area to avoid religious confrontations that typically follows such attack in the state.