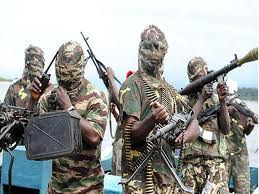 Terrible gist!
The Chairman of the People’s Democratic Party in Sharubutu Ward of Bachit District of Riyom Local Government Area, Plateau State, John Baren, along with his wife and child, were  murdered on Thursday at Gwarim in Rim village by gunmen suspected to be Fulani herdsmen.


Witnesses disclosed that the Barens were returning from a burial of a relation in Riyom town when the assailants ambushed and shot them.
A lawmaker representing Riyom Constituency in the state House of Assembly, Daniel Dem, who confirmed the incident, condemned it and called on the Special Task Force (STF) to step up security and bring the culprits to book.
The lawmaker described Baren as a hard worker and a committed party leader.
Culled from Channels TV