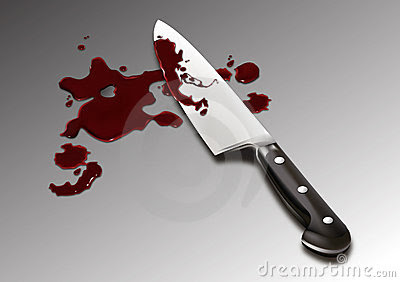 For coming back home late after work, a 27-year old trader,  Azubike Nwachukwu, has allegedly stabbed his younger brother, ThankGod Nwachukwu, 22, to death in Lagos State, Southwest Nigeria.
He is now facing a murder charge at Ebutta Metta Magistrate’s court Lagos.
The incident happened at 7,  Akipowo Owo street, Ilogbo, Ajangbadi, Lagos.
Azubike, who is now in prison custody at Kirikiri, allegedly used a kitchen knife to stabThankGod on the chest.


He bled profusely, slumped and died.When their neighbors rushed him to a hospital, the doctors merely certified him dead.
Neighbors said Azubuike might have killed his brother out of anger because they were always quarreling over money and coming back home late after business.
P. M.NEWS gathered that Azubike brought the late ThankGod from their village in Anambra State to Lagos.
Since then they have been living together and staying in the shop at Alaba market in Ojo.
On the day the incident happened, they had disagreement on the same issue and in the process Azubike allegedly brought out a knife and stabbed him.
He was arrested by the police at Ilembe division who transferred the matter to SCID, Panti, Yaba, Lagos.
He was charged to court with murder under Section 221 of the Criminal Code Law of Lagos State of Nigeria 2011.
His plea was not taken by the presiding magistrate, Mrs M. O. Olajuwon, who ordered that he should be remanded in prison custody, while his file should be duplicated and sent to DPP for advice.
The matter was adjourned till 19 July, 2012.
Posted by Yimiton at 4:41 PM