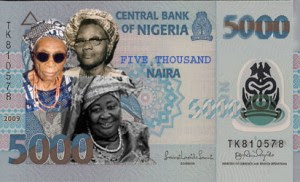 The Senate, yesterday, warned the Governor of Central Bank of Nigeria, CBN, Mallam Sanusi Lamido Sanusi, to, as a matter of urgency, stop his proposed introduction of N5,000 denomination.

Chairman, Senate Committee on Banking, Insurance and other Financial Institutions, Senator Bassey Edet Otu, said that it had become imperative for Senate to put a halt to the new CBN arrangement because a project of this kind required parliamentary approval, adding that the upper legislative chamber was never briefed prior to the announcement of the soon-to-be introduced note.

Senator Otu warned the CBN to be very careful in taking some decisions that would worsen the nation’s economy and send wrong signal that Nigeria’s currency was valueless. He stressed that the country did not deserve this policy since the nation was not in a major crisis.

According to him, “this type of action is only taken where there is a major crisis and the CBN must be very careful in order not to send a wrong signal or message to households, domestic sector and even the external ones that the Nigerian currency is valueless, which I believe it is definitely not, and that for every unit of value they need to carry a large quantity of cash.

“The CBN in 2008 and 2009 came up with a proposal to re-denominate the currency, that was even to take off the zeroes. This was just 2008 and 2009 and here we are in 2012 we are seeing a kind of policy somersault even though we understand the dynamics of the sector very well. I believe that we have to be well briefed on this.
Posted by Yimiton at 9:31 AM