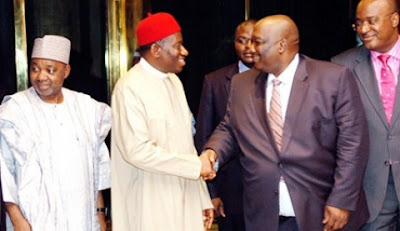 President Goodluck Jonathan has told the opposition and all the people that criticise his administration for non-performance, saying that he will be the most praised president of the country at the end of his tenure in office.

Mr Jonathan said this while speaking at the opening of the 52nd annual general conference of the Nigerian Bar Association (NBA) holding in the Federal Capital Territory on Monday.

The president wondered why the first 12 months of his administration has been awashed with criticisms over problems and challenges that he did not create, and reiterated his resolve to transform the country. He pointed at the reforms taking place in the power sector, and other infrastructure, reminding the critics that transformation does not come with a wave of the hand.
Posted by Yimiton at 6:39 PM