Twilight Stars, Rob Pattinson & Kristen Steward may be getting back together! 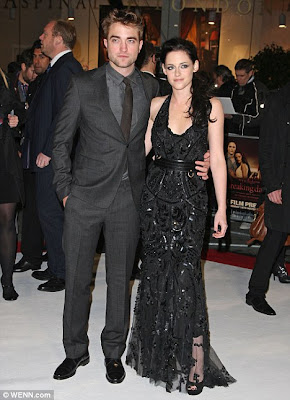 I am Team Rob & Kristen all the way! I love this couple and felt very bad for them when Kristen had an affair. I still feel her affair was widely blown out of proportion and glad that he has agreed to meet her face to face and talk everything over. Kristen has suffered enough and paid for her crime, if you ask me.

Rob is likely to forgive Kristen and take her back!

According to a close friend, Rob feels sorry for Kristen and is ready to speak to her face to face about everything that has happened. The friend told Look magazine: 'She begged to meet face to face so they could talk.

It was obvious Kristen was getting through to Rob and he has agreed to see her.' They added: 'In fact, he admitted that it must be worse for her because she's not just dealing with heartbreak, but being portrayed as a villain, while he gets all the sympathy.' After R-Patz saw T-shirts on sale that read 'Kristen Stewart is a Trampire', he decided that the time was right to speak with her.
The couple spoke for about an hour and during the call, an emotional Stewart begged Rob to take her back and pleaded with him trust her again. The close friend told the magazine: 'For the first couple of weeks he was wallowing in his own grief, but being forced to face people during this promo, and seeing how angry everyone is with Kristen, made him feel sad for her.' Even if Rob does take her back, he has some ground rules that he would like her to follow such as spending time together between film projects like Brad Pitt and Angelina Jolie do.

He would also expect her to spend more time in his hometown of London instead of Los Angeles. The exact time of the scheduled meeting has not been decided yet but Rob doesn't want to meet anywhere too public.

One big sign that R-Patz may have forgiven Kristen is the fact that he has been seen wearing her sunglasses.  'Rob and Kristen always wore each other's clothes when they lived together, and the fact that they've not stopped doing that could be a signal that it's not over between them.'
Posted by Yimiton at 3:03 PM