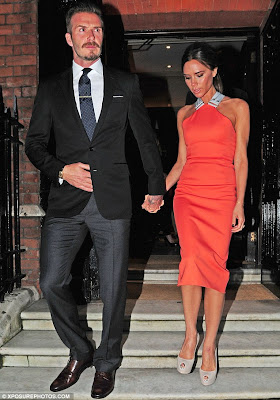 Last week, Victoria and David Beckham were rocked by sensational internet rumours claiming he'd had an affair with Katherine Jenkins. Although both the 32-year-old opera singer and the Beckhams have denied the accusations, Victoria is said to be 'bemused' by the hurtful rumours.

Despite the hurt the claims have caused, the 38-year-old fashion designer 'understands' that Katherine would want to clear her name.

The source added: 'Victoria understands why Katherine would want to defend herself against these allegations.'

Victoria is now said to be focusing her attention on ensuring her family are not dragged into a 'soap opera' after Katherine took to Twitter to deny the rumours.

A source told LOOK magazine: 'Victoria and David have been through a lot and love each other. There's no way she'd let the family get dragged into a Twitter soap opera. 'The rumours are not true, but that doesn't stop them being hurtful.'
Posted by Yimiton at 2:33 PM