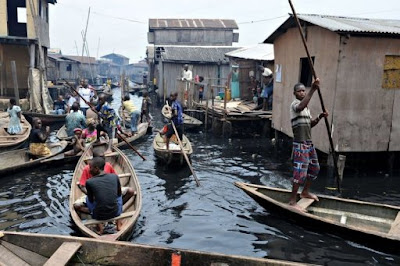 Several soldiers, police officers and officers from other paramilitary agencies, on Monday, stormed the Makoko (Ilaje) water front area of Lagos, demolishing houses and shanties.
More than 2,500 persons, mostly fishermen and their families, have been rendered homeless. There is pandemonium as the people were sighted running helter-skelter to avoid being shot by the armed soldiers and police officers.
Some of the residents interviewed complained that the eviction will alter their way of life and disrupt their means of livelihood. They wondered where the government expects them to go.

At the time of publishing this report, it remains unclear if provision has been made for the relocation of the displaced residents by the Lagos State government.
Meanwhile, The Lagos state government on July 12 warned Makoko residents that "their unwholesome structures on the waterfront" amounted to an "environmental nuisance", in a letter seen by AFP.
"Notice is hereby given to you to vacate and remove all illegal developments along the Makoko/Iwaya Waterfront within 72 hours," said the letter from the Lagos state ministry of waterfront, infrastructure and development.
Sources: Radio Netherlands Worldwide and ThisDay, Nigeria.
Posted by Yimiton at 12:05 PM