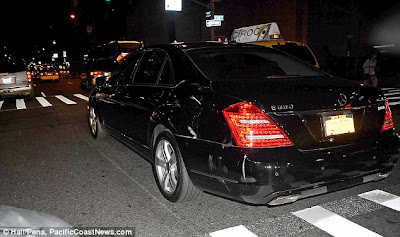 Katie Holmes and daughter Suri Cruise were involved in a minor car collision in New York City today, according to reports.
The actress and her six-year-old daughter with Tom Cruise are believed to have been riding in the back of a black Mercedes sedan when it was struck by a sanitation truck on Monday evening.
No one was reported hurt in the incident.

Police arrived to the scene and documented the damage on the S550, which sustained a large dent and several scratches to the rear driver side panel.

Katie and Suri were not seen at the scene of the accident. It was unclear if the actress and her daughter were in the vehicle when the incident occurred.
Source: Mail online UK