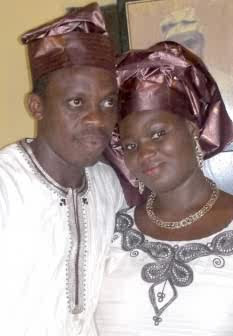 According to PMnews, Family members, friends and colleagues of a 32-year old man named Yussuf Babatunde Babalola are currently trying to unravel the sudden death of the young man who was alleged to have been poisoned on the eve of his wedding.

Investigations revealed that the late Babalola woke up at about 6.30 a.m. on Thursday, 12 July, 2012, the day he was to be at the marriage registry, complaining of stomach upset to his bride, Kudirat.

She raised an alarm by calling on his friends when the ailment became unbearable. By the time he was taken to the hospital two hours later, he was clinically dead.

A close friend of the deceased who did not want his name mentioned told P.M.NEWS that on getting to his apartment on Wright Street, Ebutte –Metta, Babalola who was unconscious, was taken to Mt. Sinai Hospital, Yaba but the doctor on duty referred them to Lagos Medical Centre, inside the Nigerian Railway compound where the deceased was confirmed dead.

A source told P.M.NEWS that one of the doctors told the family that a black substance was found on his mouth which shows that he might have died of poisoning.

Another friend told P.M.NEWS that before the late Babalola was buried on the same day at Atan Cemetery according to Islamic rite, his friends and family members separately called four doctors and a herbalist to further certify that Babatola was actually dead because of the mystery surrounding the way he died.

"We were told to go and bury him at about 3.30 when it was confirmed that Yussuf had died," said his friend.

All attempts to speak with the bride who is eight months pregnant proved abortive as she was said to have been devastated by the groom's death.

Apart from the registry, the late Yussuf Babalola was said to have also been planning to hold his Traditional marriage ceremony on Saturday, 14 July, 2012 at the Army Officers' Mess, Yaba, Lagos and his friends had bought the traditional aso-ebi for the ceremony.
Posted by Yimiton at 7:41 PM