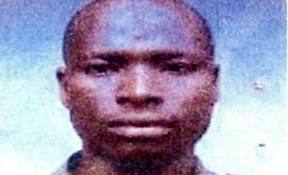 Abuja -  Habib Bama, the wanted Boko Haram member, who was shot and arrested by the Joint Task Force (JTF) in a gun battle in Damaturu on Thursday is dead.


Also the United Nation on Friday said that the Islamist militant group Boko Haram could be responsible for crimes against humanity in Nigeria.

A competent source at the State Security Service (SSS) confirmed Habib Bama’s death on Friday in Abuja.
The source said that the suspect died in an undisclosed hospital in Damaturu, Yobe on Friday.

The source as said, “Bama was fatally wounded’’ in the Thursday gun battle with the JTF.

The SSS had alleged that he masterminded the bombing of some public institutions.
They include the Mogadishu Cantonment, Police Force Headquarters, UN building and the St. Theresa’s Catholic, Madala in Niger State.

Culled from the Vanguard
Posted by Yimiton at 5:45 PM