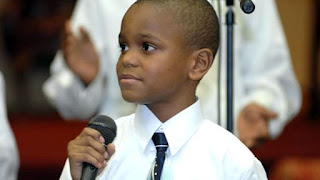 Just last month, Ezekiel Stoddard, 11, of Temple Hills, Md., was ordained as a minister in his family's independent Pentecostal church, where his parents are also pastors.

Stoddard said he was motivated to become a minister after God spoke to him in a dream and told him to read Psalm 23.

"God gave me that particular scripture because a lot of people, they try to draw you away from the lord, trying to get you on the wrong path," he said.

"People come to you, they ask you questions about why you should act like a child and not a minister," the young minister said. "I do things like a child, but still I am a minister. I am an evangelical."

Stoddard was ordained in a congregation-wide ceremony on May 6, with his parents leading the service.
His mother, Pastor Adrienne Smith, says her son preaches the 11 a.m. service with the other preachers at the Fullness of Time Church, a small but growing congregation in Capitol Heights, Md.

He has also preached at churches around the Maryland region.

Culled from Yahoo
Posted by Yimiton at 6:03 PM