Man sacrifices girlfriend because her zodiac sign is Taurus 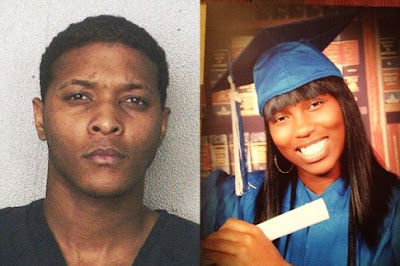 Strange things that people do! So many mad people walking around, looking like normal people.

Read the full story of a 22 year old man who beat his girlfriend with a console and stabbed her to her death because her zodiac sign is Taurus.

Darrius Johnson admitted to killing his girlfriend, Monica Gooden, after finding out she was a Taurus. He said she needed to be “sacrificed” because of her Zodiac sign.

“He told investigators that he decided he needed to do the sacrifice based on the Taurus sign,” said Lauderhill Police Lt. Mike Butkus.

The 23-year-old Gooden was found dead with multiple stab wounds in the home she shared with Johnson in Lauderhill, Florida.

In addition to stabbing Gooden, Johnson used an Xbox gaming console to beat her.

After killing Gooden, Johnson went to a nearby apartment and attacked a random old lady. The elderly woman’s nephew saved her, stabbing Johnson in the process before he fled.

Police caught up to Johnson and asked where his girlfriend was.

“She’s in heaven,” he replied.

Three knives were recovered from the scene as well as a Xbox system covered in blood that had been used in the attack.

Police suspect she was asleep during the attack as she did not have any defensive wounds.

Gooden was enrolled at Broward College pursuing an arts degree.

“I never in a million years would dream that this would happen to my first grandchild, and I’m still trying to figure it out,” said her grandmother, Mamie William.

Johnson and Gooden had a history of arguing.

Johnson is being held at Broward County jail after being charged with first degree murder.
Posted by Yimiton at 8:58 AM