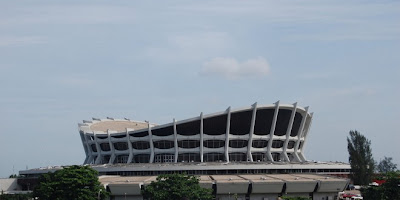 The 37-year-old National Theatre in Iganmu, Lagos Mainland is to be converted into a five-star hotel.

Minister of Tourism, Culture and National Orientation Edem Duke has given a two-week quit notice to Federal Government agencies at the facility.

Some of the agencies are National Council for Arts and Culture; Nigeria Gallery of Arts; National Troupe of Nigeria and an unnamed agency.

But some stakeholders have rejected the plan, especially the sudden quit notice given to the agencies.

They are saying the Federal Executive Council did not approve the proposal and that a transaction advisor was appointed without due process.

According to sources, an investor from Niger Delta has been linked to the project which may be executed with the Marriot Hotel Group.
The minster’s letter reads:

“The President and Commander-in-Chief of the Armed Forces, Federal Republic of Nigeria, His Excellency, Dr. Goodluck Ebele Jonathan, GCFR, has approved the development of the National Theatre Land in accordance with the original Masterplan with infrastructures(sic) which include, but not limited to a Five-Star Hotel, Shopping Mall, Multi-Level Car Park, Land and Water Restaurant, offices.

“Please recall that the inevitability of relocating your office was discussed at the meeting I had with you on this development on 5th of March, 2013 in Lagos .

“To this effect, you are hereby advised to relocate your office within two (2) weeks to an alternative location as suggested at the meeting, so as to pave (sic) way for the development that is to be situated where your office is currently located".