Confession: "I Am 24 And I Have Aborted 8 Times For The General Manager Of A Popular Radio Station in Victoria Island" 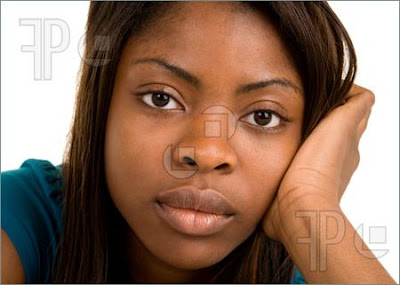 It was one bright Friday morning at Finniky Restaurant, where we were having our jaw-jaw over the many activities of Reality Entertainment, publishers of your darling newspaper, Airwaves Watch.
At first, I did not know if it was the face of the Editor-in-Chief, Kazeem Popoola, or the name, which one of the familiar faces around shouted aloud that caught the attention of this pretty lady, who sat at the far corner of the restaurant.
All I could recollect was that she walked towards our table and introduced herself to the EIC as one of the great followers of his entertainment pages in one of the daily newspapers and also quipped to have seen him on TV a couple of days back talking about a seminar and football match organized in honour of late Ambassador Olusola.

The lady requested to see Kazeem in camera. The request left me and other crew members giggling in jealousy. But when Kazeem returned, I was informed to prepare for an interview session with her the next day.

As a rookie in the print media, I was nervous and ignorant of what to ask the lady. Aside that, I asked myself why an interview with somebody who is not a celebrity? Surprisingly, the 30 minutes interview with Ada (not real name) turned out to be a mind-blowing and a great lesson for aspiring broadcasters who are desperately in need of a place for Industrial Training (IT).

In this exclusive interview, the University of Ibadan Mass Communication graduate opened up on how her naiveté turned her into a sex toy for a popular Radio station general manager.

How did it happen?

(Pauses)…I have been living with this pain for quite a while and anytime I see young girls scrambling to get a place at a TV, Radio or even print media for Industrial Training (IT), I yearn to have an opportunity of sharing my experience so they could learn and act wisely. And I thank God for this medium, and I hope this will be published because all my effort in the past was frustrated. A couple of years ago, 2010 to be precise, after my 300 level in school, I was due for an IT, so I decided to come to Lagos to search for a TV or radio station where I can do the compulsory training.

I tried for some months but getting a place proved difficult. It was in the course of the search that I met this (pointing to a picture in her hand) General Manager of a popular radio station located on Island at an eatery on the mainland. I grabbed the opportunity of telling him my problem. He asked me to come over to his office the next day. I was so happy that I couldn’t hold back my joy because my instinct told me I have gotten a place for my IT.

On getting to his office the next day, I got the shock of my life when he told me point blank that I have to sleep with him before he could allow me to have the training in the station. He even put the icing on the cake with a promise to offer me a job after graduating from the university.
I initially declined his request but I eventually obliged after considering my plight and the difficulty in getting a place for the IT.

He took me to a hotel somewhere close to the station, and this later turned to our love nest. Apart from regular visits to the hotel, which he referred to as his slaughter house, we often made love in his office, car, and toilet or anywhere at any time he wanted to satisfy his sexual appetite.

It became a normal routine for me because I was enjoying it and when he later proposed that I should marry him I was very happy, not minding whether he is married or not.

If I had known that my decision would hunt me for life, I wouldn’t have done it (sobs…). At 24 years old, I have had eight abortions! Only God knows if I can bear a child in future. Anytime I missed my period, he cajoled me into having an abortion, saying it’s against his creed, which is having a child outside wedlock.

I should have seen the handwriting on the wall two months to the completion of my IT, when he instructed the security men not to allow me into the station’s premises again. I was shocked and all attempts to get him on telephone were futile. He refused to pick my calls.

I became pregnant after fifth abortion and I told him that I am keeping the baby for real.

Don’t you have a boyfriend before meeting him?

How far with the pregnancy?

I aborted it a few months after

Did he pick your call later?

Yes, he did but I don’t know who told him that I have gotten rid of the pregnancy. We settled it and everything went on fine again, and I had three abortions for him after we reconciled. However, couple of months ago he just sent me a text that he’s no longer interested in the relationship.

No, (Shouting…) I later found out that he has been sleeping with other IT students and some of the female staff. Why he kept me for that long beat the imagination of those in the know of our love escapade. ‘Shebi’ you are a lady? I wish you could feel my pain and what other IT students may be going through.

Would you like to revenge all what was done to you?

I believe and all I can say is “vengeance belongs to God”. I leave everything in HIS hands and allow HIM fight for me. But would like to tell every young and desperate girl out there to be careful and learn from my mistakes. I would have asked you to publish his picture and name of the station he’s working for but I don’t want to pay evil with evil. But if he refuses to change, I will be left with no option than to expose him.

What if he crawls back to you?

I don’t think so, it’s over 10 months now that we broke up and I learnt he has two kids from two women.

What are you doing at the moment?

(Laughs) Not what you are thinking. I am wiser now and the reason I am even talking is that victims like me increase everyday. It’s time to stop sexual abuse of young girls in both print and electronic media. This is a cause I would like to champion soon.
Posted by Yimiton at 5:11 PM