Gay marriage and adoption to be allowed in France from 2013 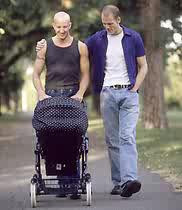 Our world is turning upside down right on our faces.

Gay couples in France will be allowed to get married and to adopt children from next year, Prime Minister Jean-Marc Ayrault announced Tuesday.


"In the first half of 2013, the right to marriage and adoption will be open to all couples, without discrimination," he told parliament, confirming an election promise by Socialist President Francois Hollande.

"Our society is evolving, lifestyles and mentalities are changing," he said in a speech outlining the new Socialist government's agenda. "The government will respond to that."

The confirmation came just days after Paris held its annual Gay Pride parade, which this year was buoyed by the promise of the new government to legalise gay marriage and adoption rights.
Posted by Yimiton at 7:18 PM