Doctors said she'll never have children but miraculously, she had quadruplet! 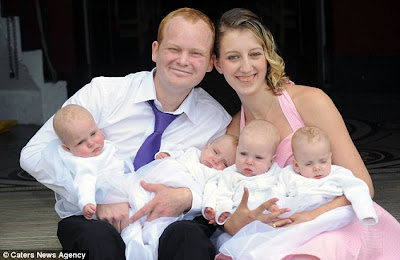 Having been told at the age of 15 she would never have children, Charlene Medlicott thought her dreams of starting a family were over.

But two sets of twins later, the 20-year-old has defied doctors and beaten twenty five million-to-one odds to give birth to quadruplets. 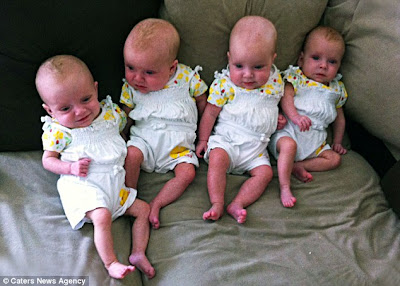 The gorgeous girls, Evelynn, Gracie-Lou, Rosaline and Amalia-Rose Connaughton, are six months old and have been christened in a heartwarming ceremony in their hometown of Telford, Shropshire

Remarkably, all four were conceived naturally in a quadruplet pregnancy considered to be very rare and potentially very dangerous.

Their mother had been diagnosed with suffering from polycystic ovaries as a teenager and been told she would never give birth.

Charlene's condition restricts ovulation and, doctors told her, dramatically lowered the odds of her becoming pregnant to almost zero.

And upon discovering she was pregnant with quadruplets, doctors advised the 20-year-old to abort two of them to give the other two a better chance of survival