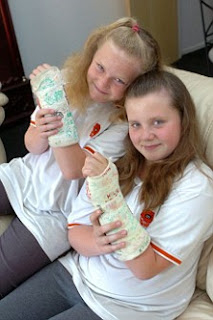 Twins and their weird ways.
Danielle (right) and Kelsey have identical injuries
Ten-year-olds Kelsey and Danielle Taylor broke the same bone in their left arms at the same time of day, exactly one week apart.

Danielle landed on her forearm playing football before Kelsey broke the same bone falling off her bike.

Having assured her mother she was not in pain, Danielle continued playing for half an hour before being taken to hospital during the evening rush hour.

A week later, a neighbour told Mrs Taylor that Kelsey had fallen but was also not in much pain.

‘But my partner looked at it and said the arm wasn’t right, so we had to battle the rush-hour traffic again,’ added the 42-year-old.


‘They are very close and fighting over who has the most signatures,’ said Mrs Taylor, of Houghton Regis, Bedfordshire.