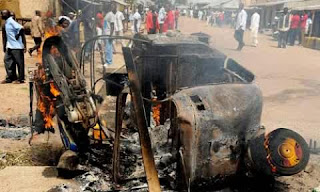 At least ten people were killed and over a dozen injured when a suicide bomber blew himself up at the Borno state Police commnad headquarters in Maiduguri, as earlier reported HERE today.

Hours earlier, a suspected bomber died when an explosive went off prematurely in another part of the city, prompting the Nigerian Red Cross to warn that conditions in the city were getting worse.
Maiduguri is now off limits to Americans following an alert issued by the U.S. Embassy where diplomats believe the situation is deteriorating. Boko Haram issued a statement yesterday assuring residents that the sect plans to take over the  North Eastern city and establish Sharia rule in due course.
Yesterday, the JTF claimed 16 members of Boko Haram were shot dead in the same area during a gunfight with police. Civilians were reportedly hit by stray bullets but police suffered no injuries
"Some suspected Boko Haram terrorists attempted to open fire on (security) operatives but could not succeed," said army spokesman Col Victor Ebhaleme.
"We have so far shot dead 16 of the terrorists during a shoot-out," Col Ebhaleme told Reuters news agency.
Tuesday's late-night attack took place in Maiduguri's district of Lawan Bukar.