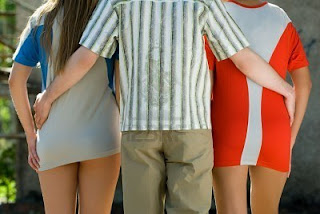 What Green Horn I was!

It was at the Republic of Benin, there basically to learn the French language, it's people and it's culture.

I stayed with a family that barely spoke English which was suppose to improve my spoken French as I'll have no options but to communicate in French.

I was housed with a girl about 2 years younger than me and we went out together a lot.

I remember this particular time we were visiting her boyfriend. We were all in his room and all of a sudden, they started touching, kissing and really making out. I was so embarrased and wondered if they'd forgotten my presence. I felt guilty, like I was spying into their privacy. I remember now, how the guy touched and kissed the girl's boobs and kept looking at me and how the girl looked at me too and I was feeling really bad. I thought they were so into each other, they couldn't wait for me to be out to get down to the real thing.

Eventually, I guess they got the message that I was never going to join in, so, they simply stopped.

It's been about 7 years now, and I suddenly realized what an invitation that was, you know why? I only just watched Sex and the City and got to understand what Threesomes is all about!
Posted by Yimiton at 12:04 PM