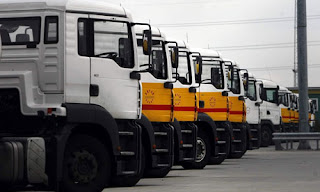 Motorists and business owners in Port Harcourt, the oil rich Rivers State capital, Southsouth Nigeria, woke up this Monday morning to be confronted with the stark reality of petrol stations under lock due to the strike by Petroleum Tanker Drivers, PTD, which has triggered off scarcity of petroleum products.

The petroleum tanker drivers stopped lifting products in protest against the arrest and prosecution of about 20 of some of them who are accused of blocking the Abonnema Wharf road in the state capital.
Abonnema Wharf road leads to the tank farm where they queue and take turns to load their products.
The traffic law officers from Rivers State Traffic Management Agency, TIMARIV, had deflated the tyres of some of them accused of blocking the road and making it difficult for other road users to pass.
The action of the TIMARIV officers angered the members who vowed not to lift products until the TIMARIV replaces the tyres deflated.
In a telephone interview, the Chairman of Rivers Petroleum Tanker Drivers, PTD, John Amajuoyi confirmed that members stopped lifting petroleum products in protest against the action of TIMARIV officials.
“We will not carry any product until TIMARIV replaces the 44 tyres they deflated,” he said.
He tactically avoided demanding that the cases instituted against his members for allegedly violating traffic laws be withdrawn.
As it were, the state government officials are reluctant to comment on the face-off because it is already in court.
Our correspondent who went round petrol stations found out it is only the Nigerian National Petroleum Corporation, NNPC, Mega station at the popular “Lagos” Bus stop that was dispensing petroleum products to motorists.
Ironically, even as there is scarcity of the products in the petrol stations, the ubiquitous ‘black marketers’ who are mainly housewives and unemployed youths are having a  field day.
The few petrol stations which still have products prefer selling to the black marketers who are ever willing to buy above the officially approved N97 per litre.
Four litres of fuel now sell for between N700 to N1,000 at the black market.