Mubarak's son permitted to stay close to his father in prison. 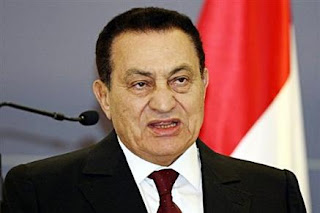 Egypt's prison authorities have approved a request to allow Hosni Mubarak's eldest son to stay close to him in a prison hospital in response to the former president's deteriorating health.

The state news agency reported on Monday that Mubarak had requested that his son Alaa be moved close to him after the authorities had earlier agreed to a similar request by the 84-year-old to have his youngest son Gamal brought next to him.
Citing a security source in the Interior Ministry, the report said the latest decision was in response to ``a deterioration in his health''.
Mubarak was jailed for life on June 2 for failing to prevent the killing of protesters who rose up against him, but the acquittal of senior police officers for lack of evidence angered many Egyptians who believe the ex-president may win an appeal.
Since Mubarak was moved to Tora prison hospital from a plush military hospital where he was held during the 10-month trial, speculation has been rife about his state of health.
Such rumours also frequently recurred as he aged in office.
Security sources said last week that Mubarak was given artificial respiration five times in one day and doctors recommended he be moved to a military hospital or back to the medical facility he was in prior to his conviction.
He has also reportedly slipped in and out of a coma at times, although prison sources said on Monday he was awake and with his sons.
Gamal, once seen as being groomed for the presidency, and Alaa are also being held in Tora prison pending a trial over a case of alleged stock market manipulation.
Corruption charges they had faced with their father in his trial were quashed.
Mubarak's wife Suzanne and the wives of his two sons also visited the ex-president on Sunday, the state news agency reported, quashing rumours that had briefly swirled suggesting the former president had died.
About 200 supporters of Mubarak protested outside Tora prison on Saturday demanding he be moved to a hospital outside prison.