Suicide bomber smashed by his own bomb! 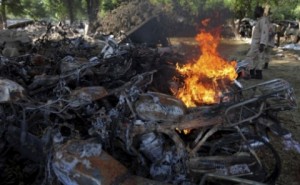 A suicide bomber was on Tuesday smashed by his own explosive device in Bauchi, after travelling by public transport for more than 393 km with the device from Yola , Adamawa state.

The Bauchi Police command on Wednesday confirmed that the bomber died while receiving treatment at the Tafawa Balewa University Teaching Hospital.


Witnesses say, he travelled in a commercial bus to Bauchi, concealing the bomb in his backpack but the device detonated, when he carelessly dropped the bag on the floor to urinate in a corner.

Shortly after the incident, while conscious and in pains, the bomber told onlookers – including police officers who had come to arrest him – that he was part of a larger cell of the terrorist group, Boko Haram sect who are infiltrating the city to carry out an assignment in “God’s name.”
He said his colleagues were on their way to the city from other towns.

When thoroughly searched, a gun was found on him, which the police reportedly took away.

A statement signed by the Police Public Relations Officer DSP Idris Abdullahi Abubakar stated that “Upon search at the scene by police bomb expert, it was discovered that the unidentified man was hit by an IED he was carrying. On search his person, Police recovered one revolver pistol, with five rounds of ammunition and he was rushed to Abubakar Tafawa Balewa University Teaching Hospital but died in the course of treatment”
The Boko Haram sect recently began its latest wave of attacks on churches, government buildings and security agents.

Culled from Channels TV
Posted by Yimiton at 6:40 PM