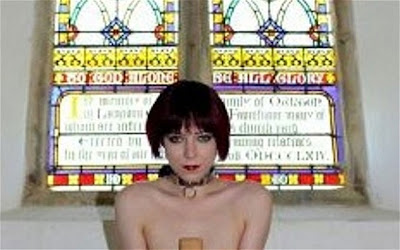 A Vicar has said the “body is a beautiful thing but there is a time and place for it” after a prostitute posted photos of herself naked in church, but called the stunt "shameless" and "sacrilegious".

The prostitute, known only as Gemma, posted the photos of her inside St Bartholomew's Church in the village of Goodnestone, Kent, on a website.
One image shows the 22-year-old kneeling down naked on the church altar as she rests her hands on a crucifix - with the stained glass window of the church in the background.

Other images show 'Gemma' from Margate, Kent, naked on a gravestone in the grounds of the 12th century church as leers over a crucifix. Although the church is no longer used for services it us open to the public after being put under the care of the Churches Conservation Trust and designated a Grade I listed building.

Reverend John Leach, of St John's Church in nearby Folkestone, Kent, said he was appalled that the sex worker was using the church to sell her services. He said: "The pictures show the loss of the sense of sacred we have in society in general.
Posted by Yimiton at 4:15 PM