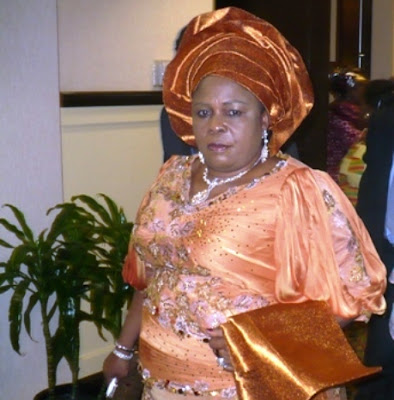 I got this gist from Transparencyng.com... and I'm pasting it just as it appeared there.

A spokesperson for the Horst Schmidt Klinik in Wiesbaden, Germany has revealed that the First Lady, Dame Patience Jonathan was in a bad state of health when she arrived at the hospital last week.

The hospital’s official, who confirmed that initial records showed that Mrs. Patience Jonathan had earlier been treated for food poisoning in Nigeria before being brought to the Horst Schmidt Klinik, however, said she was responding to treatment after she had undergone a major surgery for a ruptured appendix to remove the poisons in her intestine.

When we demanded further details, the hospital official said it was improper and unethical for her to make such details available to a third party, ending the call and refusing to pick up subsequent calls.

A reliable source in Aso Rock told us that the decision to take the First Lady to Germany for better treatment was borne out of the fact that her medical aides in Nigeria complained that they could not get accurate diagnosis as a result of insufficient medical facilities in the country.

Twelve days after she left the country, her Media Assistant, Ayo Osinlu, yesterday said there is no definite date yet for her return.

In a telephone conversation yesterday, Osinlu insisted that Mrs Jonathan is on a foreign trip to take a well deserved rest. "I can tell you authoritatively that the First Lady was not lifted by any air ambulance to anywhere, all those things are lies.

"Nobody is going to put a gun on my head and force me to talk when I have no fresh information," he said.
Asked when the First Lady will return, he retorted: "I don't know. I don't have any information on that.  You don't expect me to call her and ask her when are you returning, is she my mate? Ours is to ensure everything is in order to receive her once her return is made known to us. I do not have fresh information on that".
Osinlu had on Sunday laboured hard to justify Mrs Jonathan's sudden disappearance from the public.
“If you look at her itinerary in August, you will be wondering how she was able to accomplish that,” he told a national daily.

Credit: George Agba, Abiodun Oluwarotimi and Leadership Newspaper.
Posted by Yimiton at 8:29 AM