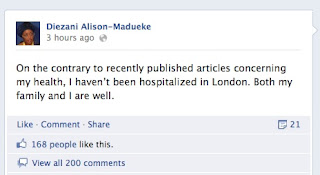 Contrary to the media reports that Minister of Petroleum Resources, Mrs Diezani Alison-Madueke was hospitalised in a London hospital for an undisclosed ailment, she has debunked the rumour, describing it as untrue.

The minister while reacting to the news through her Facebook page, on Wednesday affirmed that both she and members of her family are okay.

The statement reads; “on the contrary to recently published articles concerning my health, I haven’t been hospitalized in London. Both my family and I are well.”

It would be recalled that Diezani was said to have been hospitalized late last week for stress-related ailment after she accompanied President Goodluck Jonathan to commission new oil fields in Anambra state last Thursday.
Posted by Yimiton at 11:07 AM