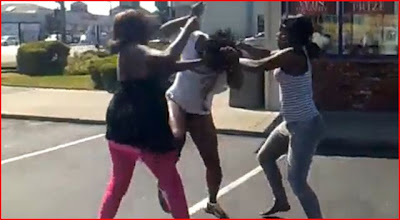 A fight broke out between two friends, Evelyn Nze, 28 and her friend, Joy Oluchukwu, 27, over Joy’s claims that she has been sleeping with Evelyn’s husband in their house at Apapa.

Joy reportedly asked Evelyn how she managed to have all her children because she was sure that her husband was impotent.

Evelyn asked her friend how she knew that her husband was impotent. She told Evelyn who is from Imo State that she had slept with her husband several times without getting pregnant.

Joy, from Anambra State, told Evelyn that she must have slept with other men that impregnated her, therefore all her children were bastards. This resulted in a serious fight between them and in the process Evelyn was injured in her hand.

The incident happened at 54, Kirikiri Road, Olodi Apapa, Lagos. The police arrested them for engaging in a fight publicly.

Also, Joy was arraigned for telling her friend that her husband was impotent and calling her children bastards.

The prosecutor, Mrs. Christiana Olagbayi, told the court the offences the defendants committed were contrary to sections 54, 166 and 171 of the Criminal Code Law of Lagos State of Nigeria 2011.

They pleaded not guilty to all the charges. They were admitted to bail in the sum of N50,000 with two sureties in like sum. The matter has been adjourned till 20 October, 2012.
Posted by Yimiton at 10:22 AM