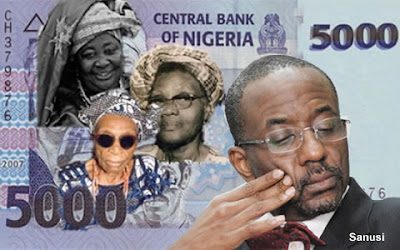 The Special Adviser to the President on Media, Dr. Reuben Abati, disclosed the development to State House correspondents in Abuja. Abati told journalists that Jonathan’s latest disposition to the issue was based on the need for more “enlightenment and consultation”. He said,

“The introduction of the new note is being suspended for now to enable the CBN do more enlightenment on the issue.
Yes, President Jonathan has directed that the implementation of the new N5,000 note be suspended for now. “This is to enable the apex bank to do more in terms of enabling Nigerians understand why it proposed it in the first place. So, for now, the full implementation is on hold.”

The CBN, in a statement on Thursday, also confirmed that it had received a presidential directive to stop action on the currency restructuring plan. The statement by the apex bank’s spokesperson, Ugo Okoroafor, reads,

“The CBN hereby informs the general public that the President, on Thursday, September 20, 2012, directed that further action on the approved restructuring exercise be stopped.

Emmm...I guess people will celebrate this nes
Posted by Yimiton at 8:46 AM