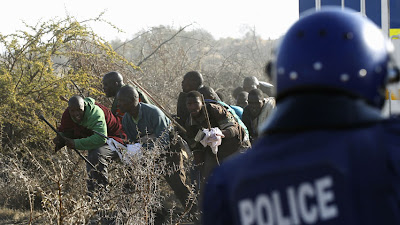 Dozens of people were killed after South African police opened fire on hundreds of armed workers on a wildcat strike at a platinum mine, in one of the deadliest days of protest since apartheid.
Police gave a toll of 30 and rising, while the powerful National Union of Mineworkers said 36 had died in clashes broadcast repeatedly on national television.
The scenes of police in bulletproof vests, some riding horses, and firing into a dusty landscape evoked memories of tragic incidents under white-minority rule.

At the Marikana mine, a force of mostly black officers fired on a crowd of black workers, who police said were advancing on them with guns and machetes.
“The police were directing (unrolling) the barbed wire… when people had guns, and people were advancing as I say, with their pangas (machetes) and everything else including firearms,” police minister Nathi Mthethwa said, putting the death toll at more than 30.
“A lot of people were injured and the number keeps on going up,” he told local radio.
“This was not supposed to happen, and we have always emphasised this thing that we have laws in this country which allows people to apply for strike, for marching, for demonstration, and we still think people should not ignore the pillars of the land,” he said, his voice cracking
The wildcat strike started on August 10, as a group of workers demanded that London-listed Lonmin triple their wages from the current monthly salary of about 4,000 rand ($486, 400 euros).
Ten people, including two police, were killed as the strike degenerated into clashes between the unions — with several victims violently hacked to death.
But Thursday’s violence shocked even this nation accustomed to frequent strikes and gruesome crime. Local media already dubbed the incident the “Marikana massacre”, evoking memories of the 1960 Sharpeville massacre when 69 people were killed as apartheid police gunned down blacks protesting minority rule.
Culled from Vanguard
Posted by Yimiton at 1:03 PM