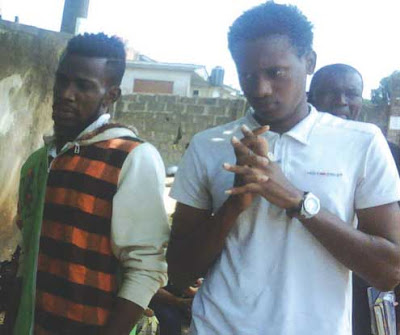 A 17-year old girl (name withheld) has narrated before an Ejigbo magistrate’s court in Lagos, how two friends, Ekene Uzor, 24, and Eni Daniel, 21, allegedly gang-raped her after they had forced her to suck their penises. They also took her nude photo with their camera phones.
The teenager was giving evidence before the court in a two-count charge of forcing her to suck the defendants’ penises and gang-raping her.
At Thursday’s resumed hearing before the trial magistrate, Mrs. M.B. Folami, the girl said she knew Daniel Uzor, who is in the entertainment industry, at her mother’s shop in Surulere, Lagos, southwest Nigeria.
The victim stated that Uzor promised to groom her to become a star in the entertainment industry and under this guise, he invited her to his residence at 10, Joe Ejeye, Jakande Estate, Ejigbo.

She said on the day of the incident, she went to Uzor’s flat where his friend, Eni Daniel was already waiting, adding that immediately she entered, Uzor locked the door to the flat.
“They came to me and started fondling my breasts and other parts of my body. They ordered me to remove my dress. They started taking my nude photographs and threatened to post them on the internet.
“They forced me to suck their penises. They had rounds of sex with me in turns. When they were satisfied, they told me to go. But they did not delete my nude photographs in their camera phones,” the girl narrated her ordeal.
She disclosed that she did not inform anyone of her experience because of fear that her nude photographs might be posted on the internet.
But after some days, she summoned the courage and narrated the incident to her grandfather who took her to the police station to report the matter.
She said when the police arrested Uzor and Eni,  her nude photographs were still in their mobile phones. The photographs were later downloaded and printed in hard copies. The court admitted them as exhibits.
The police prosecutor, Mr. Oladejo Balogun, charged Uzor and Eni before the court with the offences punishable under sections 409 and 259 of the criminal code laws of Lagos state of Nigeria, 2011.
At the commencement of the case, they pleaded not guilty when the charge was read to them.
The trial magistrate, Mrs. Folami admitted them to bail in the sum of N500,000 each with two sureties each in like sum.
Uzor and Eni were remanded in prison custody pending when they will perfect their bail condition.
The court has adjourned the matter till 31 August, 2012 for continuation of the trial.
In another incident, a 70-year old pastor, Alfred Idonije has been arraigned before an Egor Magistrate’s court in Benin for allegedly defiling a 10-year old orphan (name withheld).
The defendant, who was said to be a pastor of a church, allegedly forcefully had unlawful carnal knowledge of the girl on 25 June, 2012 after luring her into his room when he sent her to buy noodles for him.
Narrating her ordeal before the court, the little girl said the accused had raped her on three occasions and threatened to kill her if she reported to anyone.
Testifying, the major witness and grandmother of the victim, Mrs. Mary Akhighe, said the girl is an orphan.  She stated that the defendant was their neighbour who usually sends the victim on errands.
Mrs. Akghibe said on the day of the incident, she saw the victim being sexually abused by the accused inside his room.
Counsel to the defendant, Barrister Osa Uwagie, appealed to the court to grant his client who appeared frail, bail to enable him seek medical attention before the adjourned date.
The presiding Magistrate, Taye Omoruyi, granted Idonije bail in the sum of N200, 000 with a surety who must be a civil servant from grade level 12.
Counsel to the victim, Stella Ojeme and Emmanuel Dauda expressed happiness with the proceedings, adding that the adjournment would enable them present more witnesses to ensure that justice is done.
Further hearing on the matter was adjourned till 23 August, 2012.
President of a non-government organisation, Child Protection Network (CPN), Edo State chapter, Mrs. Jennifer Ero, who facilitated the trial of the case, urged parents to report cases of rape to them as this would reduce child rape cases which she said was on the increase.
“We also want to say to the public that rape is happening everyday, and nobody is coming out to talk about it. It is okay for you to come out and talk about it and for you to take the case to court,” she advised.
Culled from PMNews
Posted by Yimiton at 9:19 PM