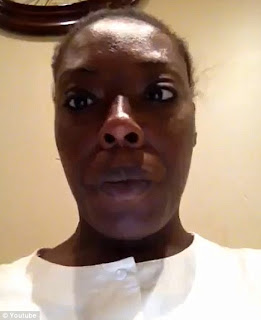 Remember the strange woman stalking Usher I told you about a few days ago? (If you don't click HERE to read up on it) She was arrested  in front of Usher's house last weekend and has reportedly been admitted to hospital for mental evaluation.

Darshelle Jones-Rakestraw, 26, was taken away by police last Sunday after she showed up at the singer's home in Georgia, Atlanta, forcing the star to get a restraining order against her.

And according to TMZ.com today, she was in such a crazed state that she was admitted to a psychiatric ward because the jails would not take her.

The website said it has obtained the incident report from Johns Creek PD that describes the events of last weekend in detail.

It claimed that when the police arrived at Usher's house on Sunday, they found Darshelle on the front porch using her iPad.

Usher had spotted her on his surveillance cameras and had called police, who identified her and placed her under arrest.

But the report said she was in such a bad mental state that she had to be taken to  Emory Johns Creek Hospital instead, where she was admitted for a mental evaluation.

She was released and is due in court next month but told doctors that she was Usher's wife and said she was outside his house because she had just mislaid her keys.

He immediately obtained a restraining order, claiming she 'placed him in reasonable fear for his own safety and/or the safety of his immediate family'.

Darshelle has also posted a video on YouTube claiming she is not a stalker and said she plans to file defamation charges against him.

In a rambling rant, she said: 'I’m not a stalker. He has officially slandered me and defamed my character.'