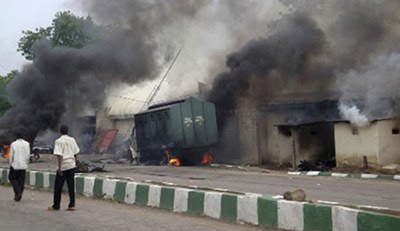 Unknown gunmen Saturday struck again in Damaturu, the Yobe State capital,  as gunfire and explosions rocked the town, shortly after a dusk-to-dawn curfew came into force following a coordinated gun attacks on targets around the city by the Boko Haram dissidents.
“Explosions and gunshots have been going on in this neighbourhood for over an hour,” said Abdullahi Musa, a civil servant. “We still don’t know what the target is because the shooting started shortly after curfew,” he added.

Another resident of the same area, a neighbourhood called Nyanya, offered a similar account.
“We are frightened due to the blasts and gunfire. We don’t know what is happening because we are indoors… We pray we stay safe,” said Safiya Mahmud, a housewife.
Separate attacks were also reported in two other Damaturu neighbourhoods, but details were not immediately available.
Source: ThisDay Live
Posted by Yimiton at 7:09 AM