A Lagos state government bus burnt down Monday night after it dragged a biker from a spot at the U-turn Bus stop, near Abule Egba on the Lagos-Abeokuta expressway, killing the biker.

Eyewitnesses say the biker died immediately after the accident severed his leg.  The biker bled to death due to injuries sustained as the bus forcefully dragged him on the road for a long distance.


According to witnesses, the bus driver did not know he was dragging the biker until the crowd raised alarm.

One eyewitness says policemen from Abattoir police station in Agege area immediately rescued the bus driver from a possible attacks from youths on the scene. The witness also said another person died with the biker increasing the causalities to two.
All passengers on the bus survived before the bus was engulfed in fire.

Some Lagos State officials at the scene on Tuesday morning said the bus was burnt by aggressive youths but eyewitnesses  insisted that the accident had caused the bus fuel tank to explode following several fire sparks caused by friction between the bus and the bike. 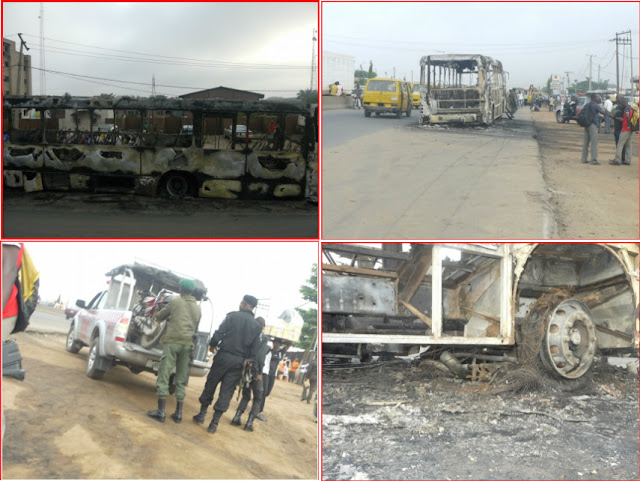 Policemen from the Rapid Response Squad [RRS] who arrived the scene later on Tuesday morning began impounding bikes at the scene as they claimed the victim's bike caused the accident.
Posted by Yimiton at 1:22 PM