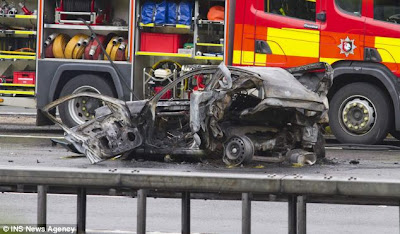 Awwwwch, horrible experience!
A female motorist has burned to death after a Porsche Cayenne rammed into her car and burst into flames on the M40 motorway.
Drivers watched in horror as the victim, believed to be in her 60s, died after being trapped in her burning car between junctions two and three at Beaconsfield.


She had broken down in the middle of the motorway when a silver Porsche Cayenne careered into the back of her car, unable to stop in time to avoid the collision.

The car was thrown 50 metres along the road leaving a trail of debris, before it burst into flames with the woman trapped inside. 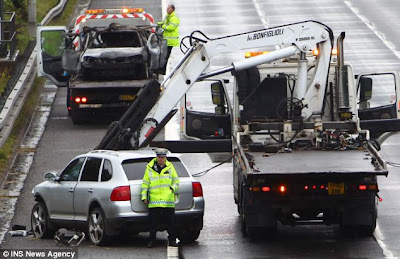 Scores of motorists caught up in queues behind the crash could only look helplessly as the victim, who was alone in her vehicle, died trapped in the inferno on the southbound carriageway of the M40 in Buckinghamshire.Burnt past recognition, police now have the difficult task of identifying her body.
A Thames Valley Police spokesman said that officers were trying to identify the woman so that they could trace her relatives and tell them of the tragedy.
He said: ‘We are making inquiries to try to identify the woman victim in this incident but it is likely this will have to be done from dental records.’
Paramedics took an injured passenger from the Porsche to Wexham Park Hospital in Slough.
Their condition was not yet known. 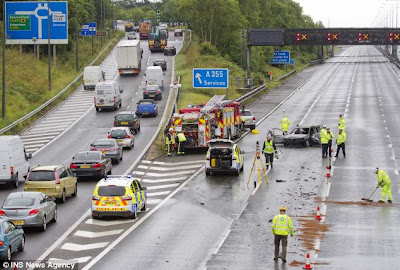 The victim was heading towards London when she slowed to a stop near the turning lane to Beaconsfield, Bucks.
The Porsche, who was travelling not far behind, was unable to stop in time to avoid the collision.
The woman was already dead when paramedics and an officer from the South Central Ambulance Service rushed to the scene.
20 fire fighters from Buckinghamshire Fire and Rescue Service put out the flames but not until the blaze had burned out the vehicle.
Firefighters erected screens in front of the destroyed car to shield other drivers’ view as they extricated the woman’s charred body from the burned out vehicle.