Update on the Sunday Bombings in Kaduna & Zaria 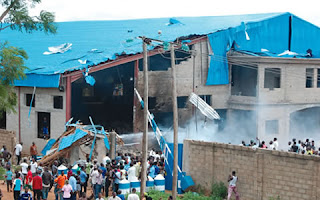 About 40 persons were feared killed on Sunday in Kaduna and Zaria as suicide bomber attacked 3 churches.

15 people were killed on the 2 churches in Zaria and 1 church in Kaduna while 25 persons were killed in reprisals by angry youths in the 2 cities.

Over 40 persons were seriously injured and rushed to the  Ahmadu Bello University Teaching Hospital, Shika in Zaria and St. Louis, Wusasa.

However, the exact figure of those that died in the Kaduna blast at the Shalom Pentecostal Church were still unknown.

Click HERE to read the full update in the PUNCH.