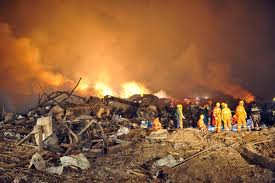 The factory was operating illegally as its licence had expired, and the family of the owner had been detained by police, Xinhua said.

Local authorities have ordered the closure of all fireworks factories in the district, the news agency added.
An explosion on Sunday at a fireworks factory in Yichun, in eastern Jiangxi province, also killed seven people and injured one.

The cause of the blasts was being investigated, Xinhua said.
China's huge fireworks industry is notorious for its lax safety standards, especially among smaller producers.

Source
Posted by Yimiton at 2:25 PM