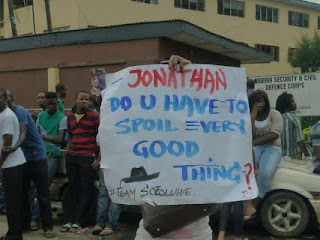 Despite the massive demonstration of the students and apparent public opinion against the idea, the Nigerian Senate approved the renaming bill which was sent on Monday by President Goodluck Jonathan to bypass any embarrassing rejection of the name-change in what many Nigerians saw as illegal and unconstitutional even with some supporters of the renaming calling it as ill-timed or politically motivated.


The Nigerian Senate is on recess, the bill had been passed without delay but the Senate will make it publicly known after its members return from recess.

A law suit had been filed by students of the tertiary institution asking that the name-change was unconstitutional as it initially was done without parliamentary approval.
A hearing date for the matter has not been fixed by the Court.

Sorry UNILAG Babes and dudes, nothing can be done now, you're officially students of MAU.
Posted by Yimiton at 4:42 PM