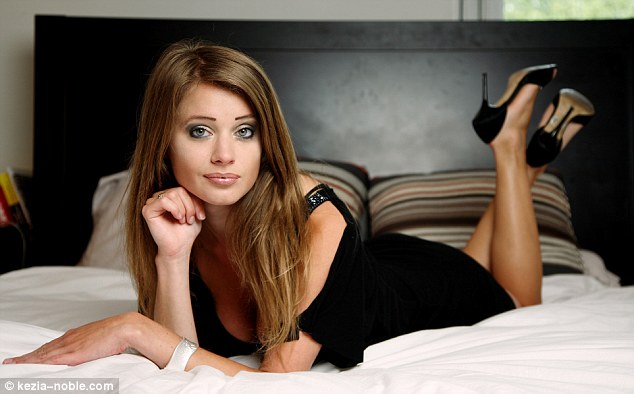 Hehen, ladies, learn o, this is a huge career. She's making huge bucks and smiling to the bank daily without even showing her legs. The gist is very long, you'll have to be patient to learn anything.

According to glamour girl turned dating expert Kezia Noble, she can teach any man how to trick a woman into bed. What's more, she doesn’t see anything unsisterly in sharing her seduction technique. Nor does she feel she’s ‘rinsing’ men by taking N1 million (£4,000) a week for her 'wisdom' (her courses have made her a millionaire). Instead, says Kezia, she is helping women find love and happiness by making hapless men 'dateable' and says she can turn any oafish slob into Prince Charming.

Kezia claims she is the saviour of the 'Brian Jones' generation - the late 20s and 30 something guys who have found themselves left on the shelf.

As they find themselves alone and staring into their pints, men are turning to the 29-year-old relationship expert in a last ditch attempt to find love.

Kezia said: 'If women want to slag me off for what I do that’s fine. I don’t care. And I’m not forcing men to hand over their money. They do it because they are desperate.

'I’m helping men get the balls they need to approach women so if anything they should thank me. It’s not like I’m teaching them to hypnotise a woman into jumping into bed. Yes, ultimately, my technique will mean they get sex but not straight away. It’s about relationships.

'People talk about women being like Bridget Jones who feel the pressure to settle down and have a husband and family but men are feeling it too.

'I would say 80 per cent of my clients are aged 27 to 35. They’ve watched their friends settle down, marry and have children.

'They no longer have their 'wing-man' who would help them pick up girls and do the charming for them. When they’re left to their own devices, they simply don’t have the skills to pick up women.

'They are, by their own admission, undateable. I’ve had guys come to me who haven’t slept with a woman for 10 years then they’ve got themselves a date.'

Kezia, a former singer and property developer, is the UK’s only 'Female Pick Up Coach' and says she has helped 7,000 men through her bootcamps, which cost £350 for a day or £4,000 for a seven day residential.

The slim brunette left school in Mayfair St Georges in London aged 15 with just five GCSES and went to work with her father, Haydon, 62, in his property developing business.

Her big break came in 2006 when she had a chance meeting with a male pick up artist named Anthony in a nightclub, who gave her a job as one of his coaches.

Two years later, Kezia, who is single, set up on her own and now gives her clients a full makeover, not just of their appearance but their personality and the way they deal with women.

'The secret to success with women is not just about confidence and chemistry as many people believe,' she explains. 'The first thing we do is look on them as a potential date might, so things like scruffy clothes, and dated hair styles need to be ironed out, and sloppy posture.

'Next, we work on their inner confidence; their ability to approach women. Men who come on my courses think this is limited to bars and clubs. But they can meet potential dates in parks, museums, coffee shops, anywhere where they can engage in conversation.

'They have approach anxiety, where they are just scared of talking to women. They think good-looking women are total bitches. I shatter those myths, make them more capable of approaching girls, and give them the skills to engage them when they do.

'In conversation, most men freeze up after asking where someone is from and what they do for a living, and if they like it.

'Instead, I guide them to more open questions, for example, "Is your job what you have always wanted to do?" "Does it put a smile on your face every day?"

'It’s not about being sleazy or telling lies. In fact, one client, an accountant, would boast about how much money he earned to girls in a bid to win them over.

'When I broke down how he really felt, it transpired that he hated his job, but it gave him the money to go on lots of trips and holidays.

'I said to him, "Well say that! That is what a girl wants to hear!" It’s about being honest and refreshing and standing out from the other guys who go on about the same dull things.

'We live in a shallow society where men can be brash and boast about material things like cars, houses and salaries, or feel inferior if they can’t show the material signs of success.

'But rich or poor, intelligent or not, there is someone out there for everyone and that’s what my classes are about.' KEZIA'S KOMMANDMENTS: FIVE WAYS TO REVOLUTIONISE YOUR LOVE LIFE

Overhaul your look: 'We look on them as a potential date might, so things like scruffy clothes, and dated hair styles need to be ironed out, and sloppy posture,' says Kezia.

Cast your net wider: 'Men who come on my courses they are limited to bars and clubs,' reveals Kezia. 'But they can meet potential dates in parks, museums, coffee shops, anywhere where they can engage in conversation'

Ask open questions and be yourself: Kezia explains: 'It’s about being honest and refreshing and standing out from the other guys who go on about the same dull things.' Take tips from the bad boys: 'A bad boy is never t

oo available, or predictable, and will put other people or his work before the girl in the early stages,' says Kezia. 'This shows he values himself and his own life and that he has a lot to give.'

Use the 'upside down triangle' to see whether she likes you: 'The gaze should move naturally between each eye and the mouth,' says Kezia. 'If the girl looks away or shifts uncomfortably, it’s a no, but if they are relaxed with this or mirror this behaviour, there’s attraction.'

Next comes body language where the client is taught how to gauge whether a woman sees him as a potential date, which Kezia terms 'sexual escalation'.

'I call this technique the upside down triangle,' explains Kezia. 'The gaze should move naturally between each eye and the mouth. If the girl looks away or shifts uncomfortably, it’s a no, but if they are relaxed with this or mirror this behaviour, there’s attraction.

'It’s simply a subconscious reaction in the same way that if you like someone and they touch your arm, you don’t mind, but if you don’t you’d pull away.'

Kezia says she has had men with wives and girlfriends come on her course in a bid to escape the monotony of their lives and find a new partner.

She said: 'I have had a few clients drop that bombshell on me, they’ve come along in the hope they’ll find the skills to get a mistress, but that’s not what it’s about. 'I’ve sent them away and told them to apply what they’ve learned with their wife or partner and it’s given them the spark back.' Kezia says her youngest ever client has been 18 and the oldest 62 and she’s had bi-sexual girls and lesbians come along to her talks too, as well as female friends who want to learn more about the psychology behind their failed relationships.

She also has a theory on why women like 'bad boys' and what positive attributes regular 'nice guys' can learn from them.

Kezia explains: 'A bad boy isn’t one dimensional. The reason girls love him is because he’s a challenge, he keeps them guessing.

'Like Christian Grey in the book Fifty Shades of Grey, he will have that flicker of sadness and vulnerability. The girl will want to be the one to tame him, to be his 'fixer' and melt his heart.

'But a bad boy is never too available, or predictable, and will put other people or his work before the girl in the early stages.

'This shows he values himself and his own life and that he has a lot to give. Like most girls, when I’ve liked a guy, I’ve made myself totally available, and they back off.

'When I’ve not been so keen and have been more aloof, guys can’t do enough. You can be a nice guy, but keep a bit back, and keep women keen and guessing. It works in exactly the same way for women.' Kezia says she learned a lot about men by reading Jackie Collins' novels such as Lucky Chances as a teenager. She said: 'It was all about these awful men and these strong women who were total bitches and I was hooked on the dynamics of the relationships.

'Then, when I was 16, I dated an older guy who really messed me around. I went into it totally blind. It was purely down to attraction and he treated me badly.

'I was badly burned and after that I found I wanted to psychoanalyse the reasons why I liked men, more to protect myself than anything else.

'As I moved forward I tried to work out the reasons why certain men appealed and by trying to decipher my own feelings and behaviour, I unwittingly learned a lot about how men act too.'

Eventually she does want to find Mr Right. 'My longest relationship was with a French guy who I broke up with recently and we were together for four years on and off,' remembers Kezia. 'But if I’m honest, I get bored quite easily with guys. I do want to settle down one day. I’d love to have two children of my own and adopt too.

'I feel that will only come when I feel at the right place in my life where I want to be with one person forever. I believe in fidelity and to me, marriage is a lifetime commitment.'

Kezia whose sister Hadassa, 22, works with her as a coach, says her mum Pauline, 52, a housewife, and her dad Haydon are proud of what she does.

She has only faced criticism from one family member who accused her of trying to get men to trick women. She said: 'My mum is happy that I’m successful and my father is proud that I’ve become a successful businesswoman. They don’t see any shame in what I do.

'I’ve had people tell me it’s not very sisterly to be teaching men how to seduce women but I don’t see it that way at all.

'I’m helping them to become more appealing to women and more truthful and self-aware as well. The guys leave as more sensitive, well-adjusted men. I’m doing women a favour!'
Posted by Yimiton at 8:04 AM