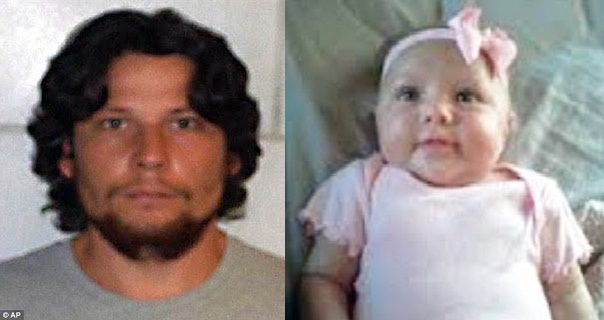 See wickedness and perversion! Na wao, how does one even start to explain this?

A 28 year old father Steven Deuman Jr has been sentenced to 2 life terms in prison for causing the death of his 3 months old daughter while he was oral raping her. In August 2011, Deuman's infant daughter, Evelynne Deuman, was found dead with a condom in her mouth. Deuman said he had stepped outside to smoke only to return and find their daughter on the floor bleeding from the nose, unconscious and not breathing with the discarded condom in her mouth.

Instead of calling 911 for help, he called the girl’s mother, Natasha Maitland, and told her their baby wasn’t breathing. A call to 911 was not made until after Maitland drove back home from work. Instead of waiting for an ambulance, they attempted to drive to the hospital, but were met by responding paramedics who tried to revive Evelynne before rushing her to the hospital.

But, according to prosecutors, Evelynne had been dead for far too long.

It wasn’t until later that Deuman allegedly whispered to Maitland that he had pulled the used condom out of their daughter’s mouth. Subsequent tests showed the DNA on the outside of the condom belonged to the baby and on the inside belonged to Deuman.

The FBI alleged Deuman killed the girl during a penetration, or attempted penetration of aggravated sexual abuse and an autopsy showed no evidence that the girl fell but determined that she died of asphyxiation.
Posted by Yimiton at 7:52 AM