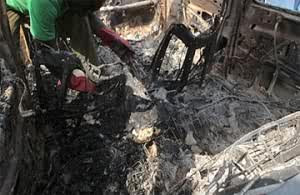 Oh my gosh! Not again. Just heard this on CNN just now and couldn't believe it.

According to Channels, over 60 passengers were killed while dozens got injured following an explosion that hit an inter-state luxurious car park in Kano State North West Nigeria.

A member of Igbo traditional council in Kano, Tobias Idika confirmed the explosion to Channels Television shortly after the blast.

According to Mr Idika "IED was kept inside the luxurious bus which was about to leave Kano to Lagos, people were frying like chicken here and you know there are over two hundred people in this bus when the two IEDs"

Another eyewitness told Channels Television that Dozens of people were injured but could not count the number of dead persons.

At the moment, no one can confirm the status of casualties in this attack as effort to contact the police or JTF was not successful as at the time of compiling this report, however residents say the area was combed by JTF.