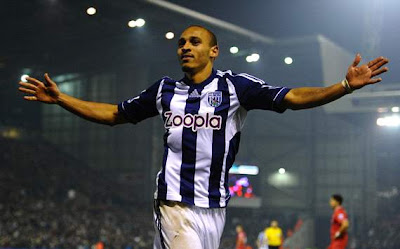 Odemwingie is facing the prospect of another fine from West Bromwich Albion chairman Jeremy Peace following his latest Twitter rant.

The 31-year-old is likely to be handed another fine of two weeks’ wages, understood to be around £80,000, for breach of club regulations.

Albion have issued a brief statement regarding the latest problem with the striker, following his notorious January fall-out over a potential move to Queens Park Rangers.

“The club are aware of what Peter has said and we will deal with it internally,” an Albion spokesman said.

Odemwingie’s latest accusations against the club come less than a month after Peace claimed in a statement that the player had “promised to comply with all club regulations moving forward”.


His tweets criticised the decision to keep him on the substitutes’ bench since his fall-out with the club and also insisted that Albion knew about his deadline-day drive to QPR.

When one Albion fan replied to his tweets, telling Odemwingie “you should be sacked”, he replied, saying “that’s my wish”.

Odemwingie also tweeted: “Keeping me on the bench now is worst than what they did on the 31st.

“If they like they shouldn’t even give me 10 mins to play. Threatening to ruin my career? Career I closed already last summer? No harm to me.”

Albion are unlikely to sack the striker and risk losing the potential of a £3 million transfer sale at the end of the season. However, it now seems certain he will be sold in the summer.
Posted by Yimiton at 9:13 AM