The life of a cute looking 12-yr-old boy who killed his 2 yr-old brother, masturbated openly in school & raped his cousin 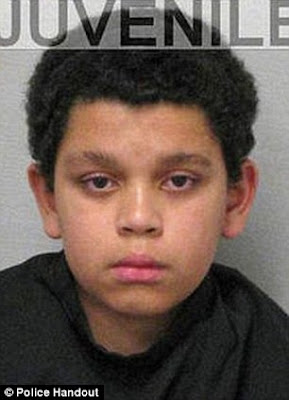 I still find it difficult to believe that this cute innocent looking boy is capable of all those despicable things he's accused of.

His mom was just 12 years old when she had him. She was sexually abused by his 25 year old father who received 10 years probation for the crime.

When he was 2 years old, he was found wondering the streets naked at 4am close to the motel where his grand-mom who takes care of him was surrounded by cocaine and he was taken to a foster home along with his mom.

At 8, he was sexually molested by his cousin, he introduced sex with his class mates and openly masturbated in school.
At 11, that's 2010, he was living with his Mother's new husband who punched him in the eye so badly that he was hospitalized. When police got to their house to arrest his Step dad, he had already committed suicide by shooting himself.

The family moved to North Jacksonvile and Fernandez enrolled in middle school. He was a very  intelligent student, getting straight A's.

On June 3, 2011, Fernandez had killed his baby brother, David by smashing his head against a shelf.

When his mom came, (she was 25 at the time) the baby was unconscious and instead of his mother calling for help immediately, she spend 4 hours surfing the net looking for ways of reviving him. She's being charged with manslaughter and might spend as much as 30 years in prison
Today, at 13, Fernandez has been charged as an adult because he poses a significant risk of violence and has been detained and charged with 2 first-degree felonies. If he's convicted of the crime, he could face a life sentence.

The big question on the lips of everyone now is: Does he really understand his rights?

What do you think? Should Fernandez be pardoned, rehabilitated and given another chance or should be sentenced as an adult and face life in imprisonment?

Source: Mailonline
Posted by Yimiton at 9:29 AM