Does this lady look like Lady Gaga in anyway? 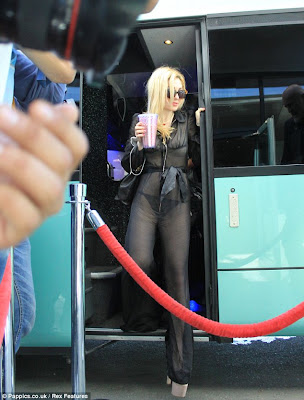 Emmm....I wouldn't be deceived for a split second. Her hair is too ordinary and there's just something not so 'gagarious' about her.

In a bid to deflect attention from herself, the eccentric singer had a lookalike pal exit her bus ahead of her.

Waiting fans were immediately excited- but it soon became apparent that the lady, who was dressed in a Gaga style look of sheer dress, no bra and black panties wasn't the Bad Romance singer after all.
Posted by Yimiton at 5:57 PM