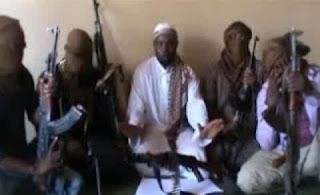 The action by the State and Treasury departments follows growing pressure on the Obama Administration to take stronger action against Boko Haram. The group, which says it wants to establish an Islamic caliphate in northern Nigeria, has stepped up attacks on Christian places of worship this year.

The three individuals, an official said, are Abubakar Shekau, aged around 43, described as a Boko Haram leader who allegedly aligned himself with al Qaeda in a video message; Abubakar Adam Kambar, aged roughly 35; and Khalid al Barnawi, aged approximately 36. All three are native Nigerians.

The expected action will freeze any assets they have in the United States, and bar U.S. persons from any transactions with them.
Posted by Yimiton at 5:52 AM