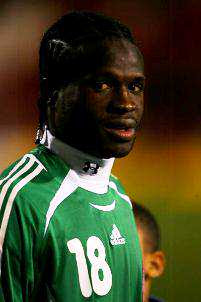 Super Eagles midfielder, Christian Obodo, was kidnapped on Saturday in front of a church in Effurun, Warri, Delta State by four gunmen.

The midfielder was driving in the car with a customised plate number 'Obodo 5′ around 9.20a.m on Jakpa Road when the kidnappers blocked his car and seized him.

They had been tailing the footballer who was said to have gone clubbing in Warri on Friday night.

The gunmen left his car in front of the church at New Layout, Effurun and took him away in their own car.

A top official of the Delta State government, who did not want his name mentioned, confirmed the development to SuperSport.com.

The 28-year-old played on loan last season at Lecce.
"Yes he has been kidnapped. The details are still sketchy but I was told he was on his way to church this (Saturday) morning with his car that has registration number 'Obodo 5.'
"Apparently his car's registration may have attracted his kidnappers because he went clubbing last (Friday) night in the same car," the official said.
The official also said the kidnappers were yet to get in touch with any of the player's relatives or friends as at noon on Saturday.

Obodo's kidnap is the first high-profile abduction of a footballer.

Last year, two soldiers and some civilians were indicted in the kidnap of the father of Chelsea midfielder, Mikel Obi, in Jos.