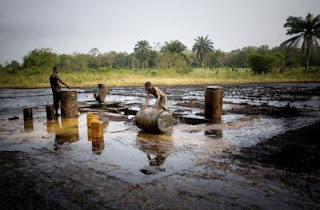 Six people have been killed in Ungwan Makama, Anchuna District of Kaduna State while trying to scoop crude oil from the NNPC pipelines.


The victims, five males and a female, died after inhaling the fumes of the crude chemical.
"Among the six people that died are John Gwani, Ishaya Dodo, Danladi Damina and three others who I cannot name for now," said Musa Sule, a resident of the area. "We did not know that the NNPC pipe line was damaged. The six of them went to the place with containers, cans and buckets to scoop fuel but unfortunately, it was not fuel but crude oil.
They died from inhaling the chemicals. We went to the scene and there was no any sign of fire. I think it was the crude and chemicals that killed them. Everyone has to take precaution from this incident. We are really surprised at the incident because it has not happened in our land before."
Reacting, the state's Police Commissioner, Abubakar Mohammed, who confirmed the incident, said investigation is still on to unravel the mystery that led to the deaths.
Culled from : Daily Times
Posted by Yimiton at 1:05 PM