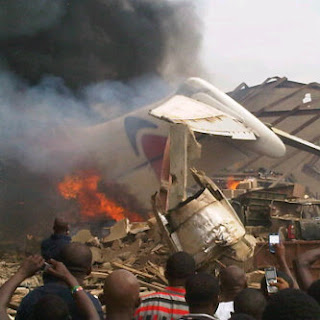 1. The first recorded air crash in Nigeria occurred on November 20, 1969 when a Nigeria Airways BAC VC10 crashed on landing in Lagos, killing 87 on board.

2. Next, on January 22, 1973, a Royal Jordanian Airlines Flight 707 crashed in Kano leading to the death of all 171 Nigerians and five crew members returning from Mecca.

7. On November 7, 1996, an ADC Airline Boeing 727-231, flying from Port Harcourt to Lagos with 142 passengers and nine crew members crashed on landing, plunging into a lagoon with all on board killed.

8. This was followed on January 31, 1997 by a SkyPower Express Airways Embraer 110PIA air crash in Yola, Adamawa State killing five.

10. On crash landing, the aircraft with 05 people on board burst into flames in a densely populated suburb of Kano. Seventy-seven on board were killed, including 74 on the ground, bringing it to a total 148 dead.

11. A Bellview Airlines Boeing 737 airliner, with 117 people on board had also on October 22, 2005, crashed and disintegrated mid-air shortly after take-off from Lagos. All the passengers and crew members on board were killed in Lisa village, in Ogun State where the crash occurred.

12. On December 10, 2005, a Sosoliso Airlines DC-9 also crashed in Port Harcourt, killing all 103 on board. Most of the victims were school children of Loyola Jesuit College, Abuja going home on Christmas holiday.

14. On October 29, 2006, an ADC Airline Boeing, 737 with 104 passengers and crew members on board crashed minutes after take-off from the Nnamdi Azikiwe International Airport, Abuja during a rain storm. All but six perished in the mishap.

15. Among the dead were a former Sultan of Sokoto, Alhaji Muhammed Maccido, and three serving senators.

Nigeria has had her own share of plane crsahes. This is so sad. We all need to pray that this count ends here.
Posted by Yimiton at 8:30 AM