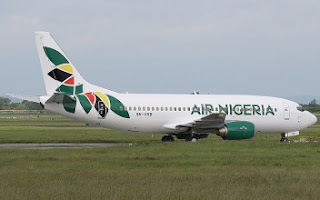 SUSPENDED Air Nigeria is again free to fly on both domestic and regional routes. The Nigerian Civil Aviation Authority (NCAA), which placed a lid on the flight operations of the airline on Tuesday, reversed the action yesterday.

The clearance of the airline was contained in a letter signed by NCAA’s Director of Airworthiness Standards, Patrick Ekunwe.

Read up the full story in Guardiannews HERE
Posted by Yimiton at 4:39 PM